Today I am stepping away from tradition and reviewing not a book, but a TV series, and a Korean TV series to boot. Well, this series is an absolute masterpiece so I couldn’t help by share it on my blog, because more people should be able to watch it. I just wish it was more readily available on official streaming services.

Susin High School, nicknamed “Prison High” or Alcatraz by both students and staff, is an elite school attended by the top 1% of students in Korea. During the 8 days of Christmas break, 8 students decide to stay behind instead of going home like everybody else. Seven of them have received a threatening black letter, while the eight one has motives of his own. Stuck with them is the PT teacher who volunteered to supervise them during the break and a psychiatrist whose car crashed on the mountain road nearby. When a record snow fall blocks the roads leading to the school, they are cut off from the rest of the world for 8 days, and there might possibly be a killer in their midst.

At first, this show sounds like a typical teenage slasher movie – 8 students, 8 days of isolation, who will survive at the end? Or like one of the Agatha Christi mysteries – 10 people stuck together and a letter threatening to kill one or 7 of them. So it might just be a “whodunit” movie. And for the first 2 episodes, it seems to be exactly that – the students try to figure out why they received that letter and who sent it.

… and then the story suddenly changes and the stakes go way up and it’s not just a matter of who sent the letter, but a desperate fight for survival for everyone involved.

Are monsters born or are they created? That’s the main question this show seeks to answer by pitting all the characters against their worst fears and pushing them to their breaking points.

I loved everything about this show. It’s only 8 episodes long but it manages to introduce us to all the characters and show us why they are who they are and behave like they do. More than that, it manages to make us care about those 8 students even if we still don’t like some of them. They are real, they are human, and we get them. So it’s becomes particularly painful to see them each face their own “monster in the corner” and slowly break down.

I think that we have the excellent writing and directing to thank for that, but also the talented actors, all of whom were unknowns at the time this series was filmed. All of them went to have successful acting careers afterwards. They really owned their characters and managed to portray all the good and the bad in them so realistically that you can’t help but root for them until the end.

The cinematography is top notch as well. Everything you see on the screen has a hidden meaning. The school itself is a huge building made of glass and concrete. It looks light and cold by day and threatening and suffocating by night. It’s all sharp angles and stark modern furniture. It’s so sterile and cold that it looks more like a hospital than school… Or a prison, since there are CCTVs everywhere, even in the student dorms.

There are also several shots of our characters in front of mirrors which echo something one of the characters says, “Your faces when alone and the faces you show to others are different.” So it’s rather ominous and fitting that all of them get to see several reflections of themselves, one of which might be a monster. 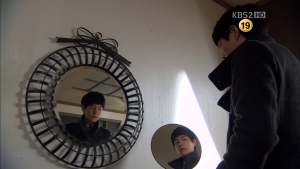 … And I could rant about this series on and on, but I will refrain myself because mentioning anything else would be spoilery.  So buy it and watch it. You will not regret it at all. It’s only 8 hours long but you will be at the edge of your sit through all of it.

PS. For US readers (and I think Europe also), this drama has been licensed and is available on the streaming site Viki.com – White Christmas.