Today is Memorial Day in the United States of America – a day to honor those who gave it all for this country, who died for our freedom. I think that this is a very important holiday and that other countries could benefit from having one of those as well, especially the country I was born in – Russia. Too often, the sacrifice of our fallen soldiers goes forgotten and our veterans die homeless and alone… So today I wanted to talk about the heroes in my family – my grandfather and my grandmother.

I was born in Russia and both of my parents are Russian. It so happens that all Russian families have had relatives who fought in World War II. Some came back, some didn’t, but all fought against the Nazis to protect their country and their family. Because all knew what fate would befall their loved ones if Hitler had won. Russians were on the same list as Jews as far as he was concerned after all – due for extermination.

My grandfather got conscripted into the Red Army paratroopers at the very beginning of the war, in 1940. He was in the radio and communications squadron. They were responsible for making sure all the other squadrons had radio contact between each other. Which often meant that they had to drive out into combat zones towards a squadron or platoon who had been in that location based on 2-3 days old intel to try and establish radio contact with them. Sometimes they were lucky and found the platoon still there and holding position. Sometimes they would arrive to late and have to chase the platoon down because they had advanced to their next location. And sometimes the platoon would have been forced to retreat and my grandfather’s squadron would ride into an ambush… 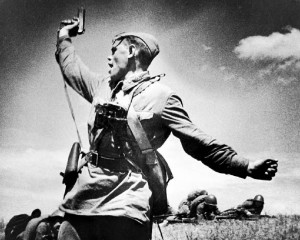 My grandfather never talked about the war. If asked, he would try to change the subject and close off entirely if pressed. When I was little, I didn’t understand why. Everybody told me that my granddad was a hero, so why wouldn’t he talk about it? Now, I know. The things he saw and went through during the 5 years USSR was at war, they haunted him until the day he died at the old age of 89. He still relieved them in his nightmares. I used to spend most of my summers at my grandparents summer house outside Moscow when I was little, and may nights I would wake up, scared to death, to my grandfather shouting.

“Where is the damn fire support?!”

Or he would talk to someone called Alexander. He talked to him a lot in his sleep. My grandmother told me later that Alexander had been his best friend and his combat brother through most of the 5 hellish years of the war. He was killed in combat right outside of Berlin. My grandfather got to come back home to my grandmother and my mother, but Alexander never did.

On days when he would have those nightmares, my grandfather would wake up before the first light and go work in the garden. He wouldn’t stop until he wore himself out enough to pass out from exhaustion and sleep without dreaming.

My grandmother didn’t fight during the war, but she did her best to help the war effort as well. She had been evacuated into Siberia at the beginning of WWII when German forces had made their first push into Russian territory and it had seemed that the Red Army wouldn’t be able to stop them. My grandmother and my uncle, then barely 7 years old, ended up in Magnitogorsk, where most of the steal foundries and military factories had been relocated. She had been 3 months pregnant with my mother then, but she still went to work on the assembly line that produced parts for the famous Katyusha Rocket Launchers, the famous anti-tank launchers that turned the tide of the war on Russian soil.

Those were tough times, with food often in short supply, especially food needed for a baby, like milk or formula. My grandmother said that often all they had were old freezer-burned potatoes and they ground the skins and scraps into fine powder and brewed it with hot water to feed my mother, because there simply wasn’t anything else to eat.

For three long years, my grandmother didn’t even know if my grandfather was still alive, and my grandfather had no idea where his family had been relocated to. He just knew that the town they had lived in had been invaded and destroyed. They had finally reunited in 1944, when my mother was 3 years old. Granddad used to joke that my mother had been absolutely terrified of him the first time she saw him and refused to call him “dad”.

Miraculously, they both survived the war and lived a long and happy life together after that and I’m thankful for their sacrifices, because without men and women like my grandparents, I wouldn’t be here, and the map of Europe would have been completely different. 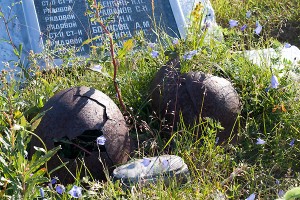 This is the story of my heroes. What about yours? Do you have a family member or a friend who fought in a war? Who gave their lives so that we can live free and happy? Tell your stories. Let’s honor them today.