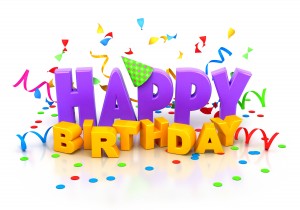 Today I turned thirty something. And don’t ask me what that something is, because I frankly stopped counting somewhere around my 33rd birthday. I figure that my husband will remind me when I reach the big forty, until then it doesn’t matter.

I chose this day to look back at my previous thirty something birthdays (at least those that I remember), and I was amazed at how much my attitude towards that day changed over time.

When I was little, my birthday couldn’t come any faster. I looked forward to December. I had a calendar and I would mark off days, and the less days remained until the 29th, the more my excitement grew. Because I knew there would be a party, there would be friends, and games, and laughter, and cake, and gifts, and… Well, you see the picture.

Then came the high school days and my birthday guest list also became a political struggle: Maria can’t stand Anna, but I’m friends with both, so I can’t invite one and not the other. Oxana won’t come without her new boyfriend, but he is a total creep, so do I really want him at my special party? And I have an invitation for Nicholas, but will he accept it? Sure, we say hi to each other at school and he seems to like me enough, but I want him to more than just like me, and gods how will I ever be able to invite him if I get tongue tied and blushing like an idiot when I see him? So yeah, birthdays became less about the gifts and more about the people.

Then came my college and post college days when all the drama of high school fell away and I spent my birthdays with a small group of real friends.

Then we all built families and birthdays amongst friends became birthdays between families, and it wasn’t really about the birthday or the gifts anymore, but about an occasion to spend time with people I love.

I used to count my years. I knew exactly how old I was. Yeah, all that stopped when I hit 30. I don’t know what it is about this particular number, but it makes you stop and think, “Holly $%^t! Where did a third of my life go?” It’s a cathartic experience, I tell you. You were a teenager, then a twenty something, but still young and so full of promise, than bham! You’re thirty andyou’re supposed to be all settled down and responsible. And your parents start asking pointed questions like “So, are we going to have grandkids soon?” And you have to laugh nervously and say something like “we’re working on it,” or “maybe in a year or two,” and you feel guilty as heck because you just don’t want kids yet.

So yeah, my thirtieth was a pivotal birthday. After that, I just stopped counting. After all, who cares? I’ll just have fun with my friends and eat some cake. And no, it won’t have any candles on it!

So Happy thirty something Birthday to me!