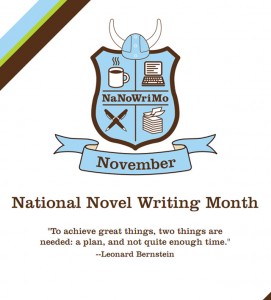 For most people November means Thanksgiving, College football, Black Friday, and stuffing yourself with so much turkey that we can’t look at it for at least the next six months. But for a select group of crazies out there, November is the month where they throw caution (and sometimes sanity) to the wind and attempt to write 50k words in just 30 days. Which also means starting a brand new story on day 1 and either finishing it on day 30, or in my case, getting a good chunk of the narrative down.

For millions of writers around the world, November is the event they have been waiting for, hoping for or dreading, gearing up for all year long. It’s NaNoWriMo or National Novel Writing Month.

Last year, I did a series of posts about NaNoWrimo that you can find under the On Writing – NaNoWriMo cathegory, so I will try not to repeat myself too much. If you are still not sure if you want to try doing NaNo  or not, I would recommend reading this post – 5 reasons everyone should do NaNoWriMo at least once.

So today, I want to talk a little bit about my reasons for doing NaNoWriMo. This isn’t my first rodeo, so to say. I’ve done (and won) NaNo in 2013 and 2014, and I went on writing afterwards until I finished the novels I’ve been working on. So I am not approaching this year’s NaNo with a need to prove that I can do it. I’ve already shown that I can. But I am just as giddy and excited about November 1st as I was two years ago. And do you know why?

Because NaNoWriMo is a wonderful and unique opportunity to throw your caution to the wind, shut your inner critic in the basement, and just run with the story. There is nothing better to shut down your “Spock Brain” as Kristen Lamb puts it in her excellent article, than having to put out 50k words in only 30 days. That’s roughly 1.7k words a day, which can be a challenge, especially if writing is not your full-time career and you have to carve time for it out of your already busy schedule. My average daily output during the year is about 600 words, sometimes a bit more, but I try to never do less. Well during November, I have to do almost triple to keep with the word count.

Let me tell you that when you are pushing yourself to write as fast as you can for as long as you can in the limited time you have (for me it’s early morning before work, during my lunch break, and before bed when the rest of my household is asleep), you don’t have time to second guess yourself or worry about your sentence structure or verb usage or even if that paragraph you just finished makes sense. You have to press on and keep the story moving, no matter what. Even if it seems silly or stupid; even if you feel like your writing is horrible; even if you are certain that you just zipped by a plot hole so big a small truck could fall into it.

During NaNoWrimo, I don’t have time to worry about that, and I never go back to re-read / edit what I have written. If I get an idea on how to change something, or if I know there is glaring mistake somewhere, I write it down in my notebook and keep on going. I can address all these issues during revisions, but I need a fully finished draft first.

And I don’t know about you guys, but for me there is something liberating about just rushing ahead and letting the story spill out of you without any restrains. Yes, it might be half-baked and will definitely not win the Nobel prize of literature, but it won’t do that just sitting inside your head either. 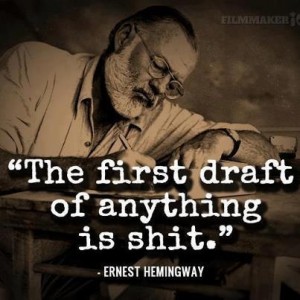 So I take a deep breath on October 31st and set off into a mad dash that doesn’t slow down until November 30th. By that time, I usually have over 50k words of my new novel written and the momentum carries me well into December and January when I finally finish the draft, because most of my novels run in the 100k words category. Of course, I usually slow down after NaNo, going back to about 1k words a day, but by that time I’m past the halfway point of my story and I am excited about reaching the end.

So to conclude this rambling post, for me NaNoWriMo is the essential yearly boost of motivation , like a writing vitamin shot, and I wouldn’t miss it for the world!