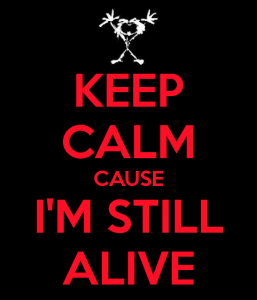 Now that we’re one day past mid-May and almost halfway through 2016 (good God, how did the time manage to fly by so quickly?), some of you might be wondering where I’ve been and why I practically went MIA for a few months, apart from an occasional book review here and there. Well, I can certainly say that 2016 has been one heck of a year for me so far.

My father passed away on January 24th after losing his battle with cancer. Even though we all knew this day was coming, it was still a shock, especially to my mother. They had been together for 53 years, after all. At least, he died in his sleep and he had one of those rare good days before passing when nothing hurt, his mind was clear, and his mood cheerful.

And then, when I had barely gotten over that emotional punch, life threw me another curve ball. My husband informed me that he didn’t want to be married anymore. He did that 5 days before our 8 year anniversary too, no less. Needless to say, that rocked my world, especially since it came out of the blue, at least for me.

So eight years after leaving everything behind in Geneva and moving to the United States to follow him, I was once again scrambling to rebuild something out of the shambles that my life had become.

But I have survived. To paraphrase Sia, “I’m still breathing.” In fact, here’s her song for you. I find it very a propos.

I have learned a couple things in this ordeal though.

First one is that you never know how strong you are until you have no choice but to be strong. I had to find a place to live, make sure that I made enough per month to keep a roof over my head and food in my fridge. I had to figure out how to get all my bills paid each month. I had to start paying off my part of the debts incurred during 8 years of marriage. But most importantly, I had to figure out how to keep moving forward when all I wanted was curl up in a ball and cry.

Needless to say that writing and blogging had not been a priority. In, fact, I hadn’t written more than 100 – 200 words a day on good days since then. It’s hard to focus on the problems fictional characters are facing when you are worried what you are going to eat for the 5 days remaining until the next paycheck once you pay all your bills. It’s hard to summon up the courage to write a romantic scene between your characters when your own romantic life is in shambles.

Not to mention that I was so emotionally and physically drained from all this that I didn’t have much strength left but to eat dinner and go to bed after I came home. Oh, and I joined a gym a month before the breakup because I was fed up with feeling fat and slow and hurting. With my evenings free of any obligations, I went there 5 days a week. That probably also contributed to the exhaustion a bit.

I think I have my budget pretty much sorted out. It’s gonna be though for a few more months, but once I get some of the debts paid off, I will be able to breathe again and even treat myself to new clothes now and then.

The second thing I learned is that you never know who your friends are until you end up in an extreme situation like that. All I can say is thank God for my co-workers and friends you were more than supportive and helped me every step of the way. I would not have found a place to stay and that I could afford if it wasn’t for them.  I would also feel extremely lonely and isolated if it wasn’t for a few friends who took it upon themselves to call me and invite me out every weekend since I moved on my own.

So the result of this upheaval is that I am now in a completely different phase in life than when 2016 began. For one, I don’t have to stay in the little military town I am in right now if I don’t want to. Nothing ties me down here anymore. I can go wherever I want. I think that I might start looking for a job in a bigger city (or even a big city like New York or Washington DC) once I have all my debts paid off and some emergency savings in the bank to tie me over. I can speak three languages. Surely some company out there could use my skills?

Also my continued visits to the gym paid off  – I lost 15 pounds and replaced a lot of fat with muscle. I dropped two sizes. I feel stronger, leaner and more energized. Not to mention that I like what I see in the mirror a lot better now.

I am also determined to get back in the habit of writing every day. I need to finally finish the first draft of Shadow Hunters that had been crying in a corner since end of March. It’s 80% done. All it needs is a big push across the finish line.

I also still want to publish Mists of the Crosswords this year, but with everything happening in my life, the publication date will have to be pushed to this Fall / Winter.

And finally, I will try to get back to blogging regularly with new content about my writing and the books I’m reading.

Life isn’t over, even if it felt that way a month and a half ago. Move on, rebuild and thrive. That’s my goal for the foreseeable future.