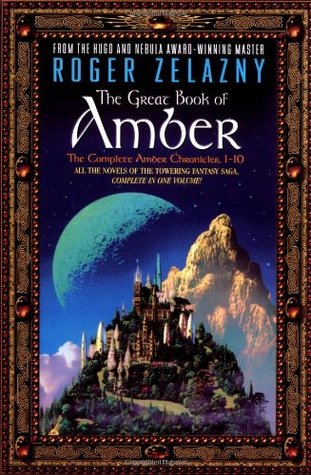 Stars 5 out of 5 (especially for the first 5 books in the series).

The Amber Chronicles by Roger Zelazny will always have a very special place both on my bookshelf and in my heart. I was fifteen years old when I came upon the very first book in the series – Nine Princes in Amber. I had never heard of Zelazny before, I was more of a Ray Bradbury, Stephen King and Gabriel Garcia Marquez type. But I was home with a particularly nasty case of flu and nothing to do, so I cracked the book open, not expecting anything exceptional… and I got lost in the complex and wonderful world that Roger Zelazny had created. So much so that I read the first book deep into the night, until I reached the very last page. And when I did, I could barely wait until morning to rush to the library and get all the rest.

The world of the Amber Chronicles is absolutely fascinating. There are two original words – the House of Amber and the Court of Chaos, and a myriad of other worlds that are Shadows (reflections) of those two. Earth is one of those reflections. Amber has a royal family and a very large one at that, because the king, being immortal, had the chance to have many wives and lovers and father many children. So there are, like the first book says, nine Princes in Amber and about just as many Princesses. They have never been a very close-knit family during the best of times, but now the king is missing, and the rivalry for the succession has started. And everything goes in the battle for the throne of Amber…

I also fell in love with the protagonist of the first five books. Prince Corwin wakes up in a hospital on Earth after a terrible accident, with no memories of who he is and a nagging suspicion that the woman who claims to be his sister and who brought him to the hospital is not to be trusted. We discover this wonderful world through Corwin’s eyes, who is rediscovering it and his place in the grand scheme of things.

I love Corwin’s progression throughout the books. He starts off as an arrogant prince of Amber, who doesn’t give a damn about people born in Shadows and is only interested in getting back to Amber and taking the throne from his brother Eric. His reason behind this? Eric is technically a bastard, so he had no right to the throne. Plus Corwin thinks he is more suited to be King of Amber.

And then we follow this character through his journey and watch him transform into someone better, wiser and ultimately more “wholesome”. He makes some mistakes that have far reaching consequences and suffers the backlash for them. Some of his actions put people he cares about in danger. He also discovers that there is more behind his father’s disappearance than meets the eye. But more importantly, at the end of his personal journey, he decides that he doesn’t want the throne of Amber, because one of his brothers is much better suited to be a better king than he ever would be.

I also loved the whole Tarot system, where each Prince and Princess of Amber had a personal card, as well as some key locations in Amber, and Amberites could talk to each other and even travel through them. The episode where Corwin escapes from his prison cell by painting an image of a lighthouse and stepping into it absolutely blew my mind.

Finally, Roger Zelazny was a master of written word and a true poet. Some of his descriptions are so absolutely beautiful. I think I will always remember his description of Corwin riding his horse from Shadow to Shadow and the scenery changing and morphing around him.

Anyway, if you haven’t read anything by Roger Zelazny yet, I would suggest that you start with these books. The first one might have been written in 1970, but it is still just as beautiful and entertaining to read now than it was then.