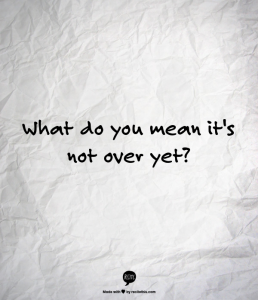 First of all, I wanted to thank all the wonderful people who had agreed to beta read this story. Your advice was priceless and very insightful, and I owe you big time! You took the time out of your busy life to journey with Lori through the mists of the crossworlds and bring back your impressions, and the story will only get better because of them.

… and the result of it is that the story will change yet again. Oh, all of my beta readers loved the Mists in its present iteration, and I could probably publish this novella as it is, but upon reading the comments, I realized that there was yet another layer to the story that begged to be explored. So I decided to postpone the release to see where else this story could take me.

If you have been following this blog for a while, you probably know that Mists is one of my works that had undergone the most transformation since its inception a year ago. It had started as a measly 4k words short story which described how Lori lead a caravan through the crossworlds. Then It grew to 8k and sent Lori looking for her friend and bringing him home. But then I decided that Theo wasn’t a lot puppy and that having him brought back home safely wasn’t really the end, so they went on another wild adventure that jumped the word count of Mists to 20k and transformed it from a short story into a novella. And now this new layer will add at least another 10k on top of that.

I’m afraid that by the time I’m finally done with them, Mists would have grown to the size of a novel. I am a bit baffled. I have NEVER encountered a story that just kept throwing new content at me every time I thought I was done with it before. It’s almost like it doesn’t want to be finished or something…

Bangs her head on the desk

Sobs hysterically in a corner

So yep, I’ll keep you posted on the progress of this one. Now the tentative release date for Mists is June 1st.

On the bright side, I finally found a beautiful cover for it once it’s done and ready to go out into the world, and you are the first to see it. Ta-da!!!!

And now I’m going back to my dark writing cave to put some more words on the page. I have a vague idea where this story wants to go, so I need to work out the details. Hopefully, once I’m done with this rewrite, Mists will be truly and finally finished and ready to be published. I wouldn’t hold my breath on that though, since I’ve said that at least twice before…