I will be elbow deep in revisions of my novel Of Broken Things, my sci-fi murder mystery which started as a love story, for at least the next couple of months, so expect to see some blog post about editing, starting with this one.

Today, I want to share with you a story that, in my opinion, is the perfect example of why it’s essential to kill your darlings when editing. And by that I don’t mean murdering your favorite characters in a particularly gruesome way. No, it means not being afraid to cut out and rewrite (or sometimes delete entirely) some scenes that you like, because they don’t work with the flow of the story. This, my friends, is the hardest and the most heartbreaking part of the editing process.

But let’s go back to the story I wanted to tell.

About a year ago, a writer I know finished his first novel and decided to get it published. He sent his manuscripts to several big publishers (yes, he decided to bypass the search for an agent process and submitted directly to the publishers), but none of them seemed interested. After doing this for several months and receiving several rejections as well as some negative feedback, he decided to seek the opinion of his peers and sent his manuscript to several beta readers. Yes, he probably should have done that before submitting to publishers, but he had been certain that the book was perfectly publishable.

The beta readers came back with the verdict that the story needed a lot of work before it was anywhere near publishable. All of them were unanimous in their assessment that the beginning needed to be scrapped in its entirety. Let me tell you why.

The story opens with a prologue which begins with the words “Dear reader, imagine a world where…” and is followed by several pages of backstory and worldbuilding. All of which is presented info-dump style. Then Chapter one starts with four paragraphs describing the weather and the scenery. So about 16 pages in, we still don’t know who the protagonist is or what the story is about. I don’t know about you, but I would have closed the book and moved on to the next one by that point.

The betas told this author, “Scrap the prologue. Find a way to integrate that information into the story in smaller bites. Introduce your protagonist early on. Start with the action.”

The author refused to change anything. His answer was, “But I like those scenes at they are!”

He was so attached to his words that he couldn’t see any flaws in his story. He didn’t t want to kill his darlings…

As far as I can tell, he hasn’t editing his book yet and still tries to send it to publishers as is. Unsuccessfully, so far. Moreover, he is so fixated on getting this story published that he hasn’t written anything new since.

I realize that it’s one of the hardest things we have to do as writers. My heart bleeds when I have to scrap a scene I had fun writing, but it’s a necessary evil to make the story better. So when editing, I try to always keep in mind the following considerations:

I agree with Ernest Hemingway when he says that the first draft of everything is shit. So I set off writing any story with full knowledge that 99% of the words I put on the page will be changed during revision. I try not to get too attached to them, which is also rather liberating because I don’t have to agonize over clunky dialogue or lack of description and setting at that point; I just need to put the entire story on paper and reach the end.

There are passages that I love when I first write them, of course. But if I realize that they don’t really work with the rest of the story, I don’t hesitate to change them or ax them entirely upon editing.

I think one of the mistakes most of us make when we write down our story is that we get too attached to a particular scene and don’t want to change it later. Like that author with his prologue.

What we must remember is that those scenes are part of something bigger, aka the story we want to tell. And the story must always take precedence over a scene, no matter how much we like it.

So when I edit a scene, I always ask myself: Does this scene move the story forward? It is important for character development? Can the same effect be achieved by adding a few paragraphs to other scenes? If the scene doesn’t meet those criteria, I don’t hesitate to take it out or cannibalize it for material to add elsewhere.

For example, yesterday I removed about 700 words worth of dialogue where my characters discuss the military structure of their world. I had tremendous fun researching and writing that scene, but it brought absolutely nothing to the story. Sure, it added to the worldbuilding, but knowing about the military structure had no impact on the story. So out of the window it went. 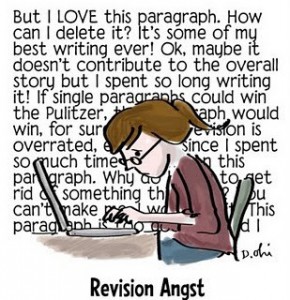 That’s the hardest lesson of all, I think. Ultimately, we don’t write stories for ourselves, not if we want them published and read at least. We write them for the enjoyment of our readers.

If a reader tells you, “I loved your story! I couldn’t put it down! What other stories do you have for sale?” that’s when you know you’ve done it right, no matter how many darlings you had to kill in the process.

2 thoughts on “Kill your Darlings.”