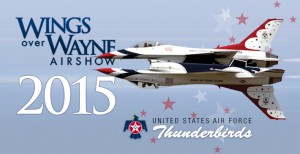 I have never been to an Air Show. Considering that I have lived next to an Air Force base for the past seven years, this is inexcusable. Though I might add that we didn’t even have an air show in our little town in the past 5 years, thanks to the budget cuts our current administration inflicted on our military.

So when I learned that Wings over Wayne would finally take place this May, I decided that I had to go. After all, that’s something new and exciting, and it could be considered as research, right? What if I decide to write about pilots or something? So with that excuse in mind, I spent my whole Sunday on the flat line, watching planes take off and do amazing things. Oh, and I saw the Thunderbirds! Up close too! And it was AWSOME!!!

Ahem. But let’s not get ahead of ourselves.

We wanted to go to the Air Show on Saturday, but when we saw the line of stopped cars 3 miles away from the gates, we turned around, went to Lowe’s instead and spent the whole day creating a vegetable garden in the backyard. Turned out to be a rather productive day, actually, and I might even have some cucumbers, tomatoes, zucchini and squash this summer, unless I manage to kill them. Which is a lot more probable. Green thumb I do not have.

Anyway, it’s a good thing that we didn’t try to get to the Air show that day, because the whole town was gridlocked most of the morning and then again in the evening with people trying to get to the base and to leave it after the show. I heard that the Highway was at a standstill up to ten miles outside of town!

So we were wise enough to wait until the next day and go there early. We were also lucky that the company I work for had a VIP boot right at the flight line, so I volunteered to man it on Sunday. This let us park on the Vendor parking and get there before the crowds.

And as that was my first air show, I thought that everything on the program was amazing.

The paratroopers did some acrobatics in mid-air that shouldn’t be possible on a planet with gravity. First they stacked their parachutes into a 4-man-tall formation, then they turned the bottom one upside down to drag like a tail behind the formation. Then they separated and landed within a few feet from each other and the big X painted on the ground. And all of them have hundreds of jumps under their belt. I mean how? You would have to push me out kicking and screaming even for my first one, and it would probably be my last one, because there is no way I get into a plane with you ever again.

I loved the TORA! TORA! TORA! reenactment of the Japanese attack on pearl harbor. It had a lot of WWII planes and explosion and an excellent soundtrack. I don’t envy the fire brigades who had to make sure that the jet fuel they burned to simulate the explosions didn’t get out of hand and burn half the base, especially since it was a very warm day.

They also did a joint forces combat simulation with F-15s, Warhogs, Bombers and paratroopers and simulated aerial combat. That was impressive in itself, but the thing that completely floored me was at the very end of that simulation.

All of the planes except for the two F-15s had already landed, when the presenter said, “Now we will show you the fastest way a fighter plane can get to the right altitude for landing. This particular maneuver is designed to reduce the time they spend on low altitude and in range of ground to air weapons to a minimum.”

And those planes are rather high up right now, so I think, no way they can descend fast enough to land in one pass.

Then the two F-15s flip upside down, point the nose straight towards the ground and dive from 4000 feet to about 700 feet. Then they turn back to horizontal and are ready for landing. And I pick my jaw off the floor.

But the Thunderbirds put everything else that came before them to shame. Their performance was… out of this world, that’s all I can say. I didn’t know it was possible to make a plane, even a fighter plane, do what they did. Not at those speeds and that altitude. And they also made it look so easy…

Flying in perfect diamond formation and then the four planes do a perfect synchronized Aileron Roll without breaking formation. Who do they do that? Or when two planes fly on above the other, one of them flips upside down and they almost touch cabins…

I would have taken more videos, but my phone died halfway through their presentation AND I was too busy gawking with my head turned to the sky to even remember to start the recording. Plus they are so darn fast!

Anyway, consider me amazed, awed and happy to have spent a day at the Air Show! Even if that’s research I might never use for my writing.