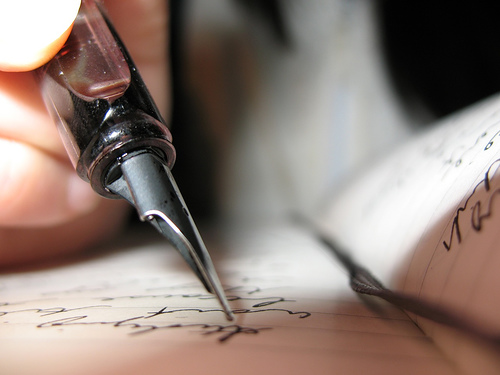 I remember reading the excellent book On Writing by Stephen King sometimes in 2009, when I had just moved state-side with my husband. And I remember feeling so pumped up and excited to start writing something, because the great Stephen King said that ANYONE could write a story, they only had to start.

So I sat down with my pen and paper, already thinking about printed books and glory and fame… and I hit a wall. I had nothing to write about. My mind was blank. Not a single interesting story idea to be found anywhere. But I wanted to write! So I grabbed the first half-baked story that had the misfortune to wander into the spotlight and tried to run with it. The run quickly became a walk, then a crawl, and finally it died in horrible convulsions. That was my first effort at becoming a writer and, as you can see, it was not a very successful one.

Then in October 2013 a good friend of mine told me, “Why don’t you try doing NaNoWriMo with me?” I looked at the site, I read the rules, and I decided why the heck not? But the last disastrous foray into the land of writing was still fresh in my mind, so I was rather freaked out to just start on November 1 and write 50k in 30 days. And I still had NO IDEA what I would be writing about! Needless to say that the closer that first of November loomed, the more stressed I got.

And then a miracle happened. Around October 15, one a character literally barged into my dream, knocking the door down with his military boots, and said, “Ok, you will write this, and you will write it now.” I woke up with a half-formed idea, three fully-formed characters and an almost feverish need to put pen to paper and get story out, because it was burning me from the inside. I spent the last 15 days before the start of NaNo frantically outlining the story, I hit the month of November running, and I didn’t stop running until I finished the first draft around January 15.

During this exciting journey, I learned a lot about writing in general, as well as what worked and didn’t for me (outlines are a must – I can’t pants it for the life of me). But something even more extraordinary happened in the process as well – all of a sudden, my mind was bombarded with stories clamoring to be told. I was writing one, and at least three more were knocking more or less politely at the door, waiting for their turn. Where I had suffered from lack of things to write about back in 2009, I was overwhelmed with possible ideas now. It was like the trickle had transformed into a downpour!

I now have a list of stories I want to write, and it’s getting longer every month. I must admit that it’s exciting. I am in the middle of the first rewrite / edit of my NaNo novel, and I have a finished short story waiting for a second rewrite, but I am also writing a brand new story that might turn out to be a novella. And I have enough plots for at least two more short stories set in the same word as another short story I just started sending out to magazines. Not to mention, another half-written novel I really want to go back to, because I have finally figured out the outline for it.

I guess it is true what everybody says – the more you write, the more you discover stuff to write about. It’s hard to start the ball rolling, but once it’s on the move, it gathers all sorts of interesting things along the way.

5 thoughts on “The more you write, the more ideas you get.”