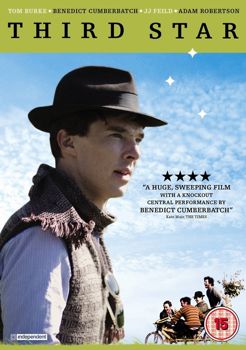 Watched Third Star a couple weeks ago, but it took me that long to actually sit down and write a review. I had to let some time pass and wait until the raw emotions this film provokes settle down a bit. I can say this – it’s one of the best movies I have seen this year, but I will admit that not everyone will like it.

Basically, if you are looking for a an easy, switch your brain off and laugh out loud movie , walk away. Third Star is anything but easy, though it has some funny moments. If you are looking for two hours of eye popping non-stop action, chose something else to watch. But if you want a movie that grabs you and takes you on an emotional roller coaster, a movie that makes you laugh and cry and hurt with its characters, a movie that leaves you with many things to think about once it’s over – by all means, buy Third Star.

The main premise is common enough: four childhood friends – James (Benedict Cumberbatch), Davy (Tom Burke), Bill (Adam Robertson) and Miles (JJ Feild) embark on a road trip to James’s favorite place on Earth – Barafundle Bay in Pembrokeshire, Wales. But this is where this trip differs from countless other road trip movies. James is terminally ill with cancer and his friends decided to organize this trip as their last adventure together. This is not a spoiler. In fact the movie starts with James saying “I am 29 today. I won’t be 30.”

So this movie is a road trip, yes, but one that is also a goodbye –  goodbye to a friend, to childhood memories, to dreams not fulfilled and paths not taken. And while all four of the protagonists do their best to ignore the elephant in the room (James’ sickness), they will have to face it eventually, as they will have to face their own shortcomings and lost dreams.

It is hard to describe this movie. Yes it is sad and the ending is hearth-wrenching and had me really crying, which not a lot of movies do. But you know what? It’s also filled with beauty and subtle humor and you can really see how much those four care about each other.

To me, this is what this movie is about – love. Those four friends really love each other and they genuinely care about James or they would never be able to make the decision they made at the end of the movie. And they all love life and see the beauty in the little things around them.

All four actors gave exceptional performances for Third Star. Nothing is overplayed or heavy-handed. I believe them when I watch them interact on screen. I forget that it’s Benedict Cumberbatch and JJ Feild, instead I only see James and Miles. That is the highest praise you can give an actor.

But most importantly for me at least, this movie made me think. We all have dreams and things we want to do eventually, one day, when we have time. And after a while, like James says, “all those daydreams become fantasies rather than possibilities.” Well what if there is no more time? What if the next day is your last one? What would you see when you look back at your life? What happened to all those possibilities and dreams?

This movie made me think about what I really want to do with my life. And you know what? I don’t want my dreams to become mere fantasies. I want to fulfill them, even if it will be hard work. So for this realization I must thank director Hattie Dalton and Western Edge Pictures and the main actors.

And for those who want to spend two hours with a good movie that makes you sympathize with its characters and think about life and death, watch Third Star. It’s available for download from Amazon or on ITunes.